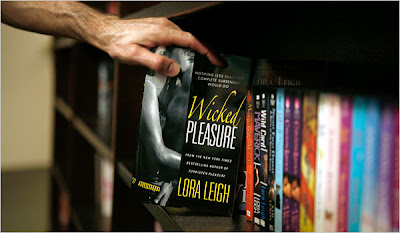 In a recession, what people want is a happy ending. At a time when booksellers are struggling to lure readers, sales of romance novels are outstripping most other categories of books and giving some buoyancy to an otherwise sluggish market. Harlequin Enterprises, the queen of the romance world, reported that fourth-quarter earnings were up 32 percent over the same period a year earlier, and Donna Hayes, Harlequin’s chief executive, said that sales in the first quarter of this year remained very strong. While sales of adult fiction overall were basically flat last year, according to Nielsen Bookscan, which tracks about 70 percent of retail sales, the romance category was up 7 percent after holding fairly steady for the previous four years. At Barnes & Noble, the country’s largest book chain, where its chief financial officer, Joe Lombardi, recently warned that overall 2009 sales were likely to fall between 4 percent and 6 percent, sales of romance novels are up. And in the first three months of this year Nielsen Bookscan tracked a 2.4 percent rise in romance sales compared with a slight decline in sales of general adult fiction for the same period. Those figures may underestimate the demand for romance, since a significant portion of sales come from retailers like Wal-Mart that are not tracked by Bookscan. Like the Depression-era readers who fueled blockbuster sales of Margaret Mitchell’s “Gone With the Wind,” today’s readers are looking for an escape from the grim realities of layoffs, foreclosures and shrinking 401(k) balances.

The romance genre may also be especially attractive to consumers during difficult economic times because so many of the books are sold in the mass-market format, smaller paperbacks often found on racks at the grocery store or in airport bookshops. These books sell for $7.99 or less, compared with $12 to $15 on larger trade paperbacks. Romance novels also often appear in discount chains like Wal-Mart or Kmart, where shoppers make impulse buys. “If you’re going to Wal-Mart or Target anyway, you’re more likely to go and pick up a book,” said Ms. Hayes of Harlequin. “And a book is such incredible value in this environment.” Several retailers including Kmart, Wal-Mart and Kroger have been running three-for-$10 or two-for-$5 specials on Harlequin’s new titles.