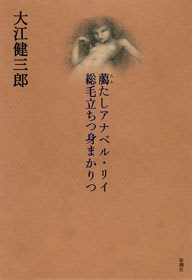 Dice la nota: "The book opens with a scene of the novelist (also the narrator of the story) being reunited with a film producer after a 30-year interval. Once they had tried to make a movie in Japan with an internationally renowned actress named Sakura commemorating the 200th anniversary of the birth of the German writer Heinrich von Kleist (1777-1811). In the process, however, it was revealed that Sakura had been sexually abused by her American guardian during the Occupation. After another scandal involving the film crew, production of the movie stopped. In Oe's new novel, the plan to make the film is given a second try on Sakura's initiative.

Dice Oe: "This is the first time I have chosen a woman to be the leading figure," Oe says. He adds that although women are the protagonists in "Ame no Ki (Rein Tsurii) o Kiku Onna-tachi" (Women listening to a 'rain tree,' 1982), "Jinsei no Shinseki" (An Echo of Heaven, 1989) and "Shizukana Seikatsu" (A Quiet Life, 1990), he used the women as mirrors to write about men. "This is the first time I decided to depict a woman," Oe says. "For the first time, I decided to write a novel with a happy ending, where someone flees from a place of suffering. A woman, wounded as a girl 30 years earlier, is healed after finally filming a movie. [The novel] ends with the woman, who is like Annabel Lee, facing a bright future. I intentionally hoped to offer up some optimism (...) I like forming grand plans and begin writing in the hope of pulling them off, but I always come upon the fact that the novel will not end unless there is a setback. If you think about it, if the leading character is watashi or boku [I], there is no way the character will succeed. This time I chose a woman as the main character and led her to a happy ending. After I finished writing, I felt that a bright outlook gained after overcoming life's difficulties is about actively accepting one's youth anew"