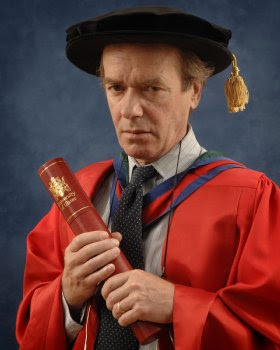 Least ecstatic reaction of the year
“Oh, Christ. You can’t go on getting excited every year about this. I’ve won all the prizes in Europe, every bloody one.”

Best bid to reduce own sales
“When people pick up a book they may want something happy that will cheer them up. In that case they shouldn’t really pick up my book. It’s the intellectual equivalent of a Hollywood weepie.”

Reassuring declaration of the year
“I don’t want to strip-search you, Yasmin, or do anything that would even momentarily surprise your dignity, or that of any eirenic Muslim.”

Most impressive act of lawless rebellion
“We arrived in Edinburgh at 4am on Wednesday. I have a flat in the city, but I was coming over for a showing of my short film, Nuts, at the Film Festival, so I thought I’d let them put me up in the Prestonfield hotel. It’s the best hotel in the world — there are peacocks strutting about on the lawns and you feel like you’re in the middle of the Highlands. I saw American indie film-maker John Waters on the golf course.”

From the title track of Stacey Kent’s album Breakfast on the Morning Tram, one of four with lyrics by Kazuo Ishiguro

Ill-advised self-comparison of the year
“Would Kafka have put up with this? Would Henry James?”

Ian McEwan puts the case for dropping the tense Booker banquet and simply awarding the prize like the Nobel, Today programme

Runner-up
“To paraphrase and slightly adapt Vladimir Nabokov: I think like a genius, I write like a distinguished man of letters, I talk like an idiot.”

Martin Amis defends his comments on Islam on the grounds that he didn’t “write” them, The Guardian

Excessive information award
Norman Mailer to Philip Roth, in queue for the loo before a memorial service: “Phil, sometimes I have to go into a telephone kiosk to pee. You just can’t wait at my age.”
Roth: “I know, it’s the same with me.”

Exchange recalled by Mailer in conversation with Andrew O’Hagan