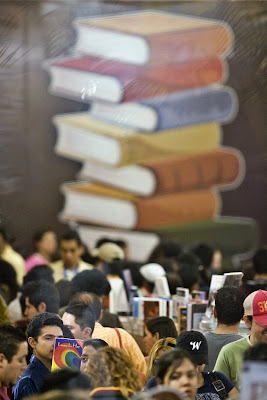 Dice la nota: "In the past five years big international publishers such as Planeta, Santillana and Random House Mondadori have bought local imprints throughout the Spanish-speaking world. This lets them market books worldwide while selling at local prices, and scout for promising writers. Deals that offer rights across several regions are becoming more common. And although the number of titles published in Spain has declined slightly for the past few years, it is growing strongly in Latin America. Five Latin American countries now have higher rates of book readership than Spain.
Even so, distribution in Latin America remains difficult. As if to underscore this, a container of books was stolen on the way to Guadalajara. Counterfeits are also a problem for publishers. Riccardo Cavallero, boss at Random House Mondadori, the leader in Spanish-language paperbacks, says that in Chile sales of pirated books can equal those of legitimate copies. There is also a wide variation between Spanish-language markets. Mexico has few bookshops—one for every 82,000 people, or an eighth of the number in Spain. And the enthusiasm at Guadalajara notwithstanding, the industry frets that readers are scarce or, sniffily, that they prefer self-help books to more elevated fiction. Novelists and poets in Latin America are often prominent public intellectuals. In Mexico writers can still benefit from generous tax breaks, stipends and government appointments. “The idea is that culture generates the nation,” says Álvaro Enrigue, a novelist. This system may produce fine literature, but the resulting work does not always have broad appeal: a well-received Mexican novel may sell only 5,000 copies worldwide, though political non-fiction can sell 100,000 and be very influential. Things are better in Argentina, by contrast. It has a bookshop for every 48,000 people, more than 2,000 public libraries, and avid readers. Its publishers produce nearly eight times as many titles as Mexico's, even with less than half the population. The economic crisis six years ago boosted local publishing by making imported books prohibitively expensive. Costs remain low there, and many companies—such as Planeta, which publishes the Spanish translations of “Harry Potter”—print books in Argentina for distribution abroad. The biggest hurdle now, says Daniel Divinsky, who publishes “Mafalda”, a children's title that has sold more than 20m copies since the 1970s, is that Argentina's creaking printing infrastructure is running at maximum capacity.