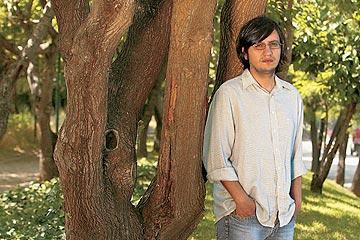 The novella -- and the relationship, and their very lives -- revolve around that one short story they read together, and a variation of which Julio types out in a novel called Bonsai ..... And if that seems almost too neat, Zambra helps his cause by leaving the story a bit ragged too, and by not having that be all there is to it. Other things happen in their lives, too, which makes the central twist all the more effective. It's not an entirely original story, of course; that's one of the problems with fiction that relies so much on literature itself. Bonsai feels even more derivative because Zambra's entire approach to presenting these lives, and their relationship, reads exactly like what Alain de Botton was doing in his early novels -- just with a Chilean spin: "At the age of seventeen, Emilia enrolled at the Universidad de Chile to study literature, because it had been her lifelong dream. Anita, of course, knew that studying literature was not Emilia's lifelong dream, but rather a whim directly related to her recent reading of Delmira Augustini" Still, Zambra does it well, making for an enjoyable, pleasantly surprising, and clever read. Worthwhile.