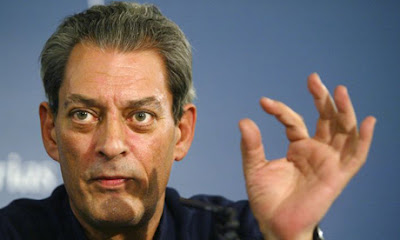 The process of writing Man in the Dark was, Auster says, unusual for him. It took just four months, faster than any other book he's written. "It was one of those odd situations where the next word was always there," he says. "There was Brill, lying in bed, and little by little you slip into the skin of this other being, and find out who he is, and the novel starts to emerge out of this." As well as Auster's rage at America, the story has its roots in a very personal tragedy: the book is dedicated to Israeli writer David Grossman, a good friend of Auster's, and to the memory of Uri Grossman, David's son, who was killed in Lebanon two summers ago, aged 20. As Brill lies awake through the night, he worries about his granddaughter Katya, "who used to sleep with a young man named Titus Small, but Titus is dead now, and Katya sleeps alone with her broken heart." "The devastation [Uri Grossman's] death has caused in the family is incalculable. I think I was so horrified by this that the character of Titus is in a way a personal response to that," says Auster, who feels the Grossman's tragedy was perhaps "the central event of the book around which everything else accumulated". "Of all people, David has been fighting for peace in the Middle East all his life, and his son was killed roughly 24 hours after he and Amos Oz and other Israeli writers implored Olmert to declare a ceasefire. It was bad, it was really bad."

He's already written his next novel, which he'll reveal is called Invisible and has a 20-year-old protagonist ("no more old men in rooms for the time being"). It's out next year, but for now he seems to content to watch as "the weird world rolls on", to borrow a phrase from Nathaniel Hawthorne's daughter Rose which resounds through Man in the Dark. He's hoping something will emerge shortly. "When I'm writing I don't feel neurotic," he says with a grin. "So it's better for the family if I'm working."